Mr & Mrs V from Stratford, E15 were just about to sit down and eat breakfast in their conservatory, when Mrs V noticed what looked like a number of fleas moving about by the conservatory door.  Mrs V screamed out to her husband who was still carrying plates through from the kitchen, which he nearly dropped in the commotion.  Mr V quickly ran into the conservatory and closed the door before anymore got in.  Realising quickly that there must have been a flea infestation Mr V grabbed his mobile phone to give me a call, and we arranged an urgent visit.

We understood that it was imperative to attend the site urgently, as the problem needed to be dealt with and the infestation brought under control, so an emergency visit was arranged for that morning.

Whilst talking to Mr V it was established, that there had been a female fox who had burrowed under their shed and had given birth to a litter of pups, who they suspected to be the reason behind the infestation of fleas.  His wife had been feeding the foxes over the last few weeks, as she could see the female fox needed help to feed her pups, but they had now moved on.  The shed was located next to the conservatory, so it was how the fleas had got in, with this background knowledge we were able to put the clients mind at rest as it was likely this is how the infestation had started.  The client was advised that a chemical treatment would be required to both the conservatory, ground floor rooms and the shed area to eradicate the infestation.

A Chemical treatment was completed in all lower floors to the property, internal and external areas of the shed, including all soft furnishings and carpets.  Mr & Mrs V went to visit their grandchildren whilst the treatment was carried out as they were advised to not return to the property for at least 3 hours due to the chemical strength, after this it would be safe to return.  That was fine as they had already planned a visit to the park as a treat for the grandchildren, so they would be away from the property until later that day.  The next day we spoke the client to check all was well, to Mrs V’s relief the treatment had been successful and no more signs of fleas!

Thank you so much for your same day visit to treat the flea infestation within our home. Who would know that trying to help the female fox and her litter would result in us being infested with fleas! Totally professional service from start to finish, excellent rates, and friendly technicians, we will definitely be keeping your number for any future problems. 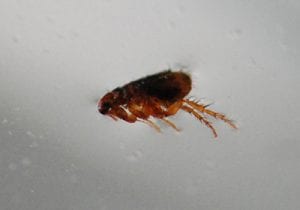